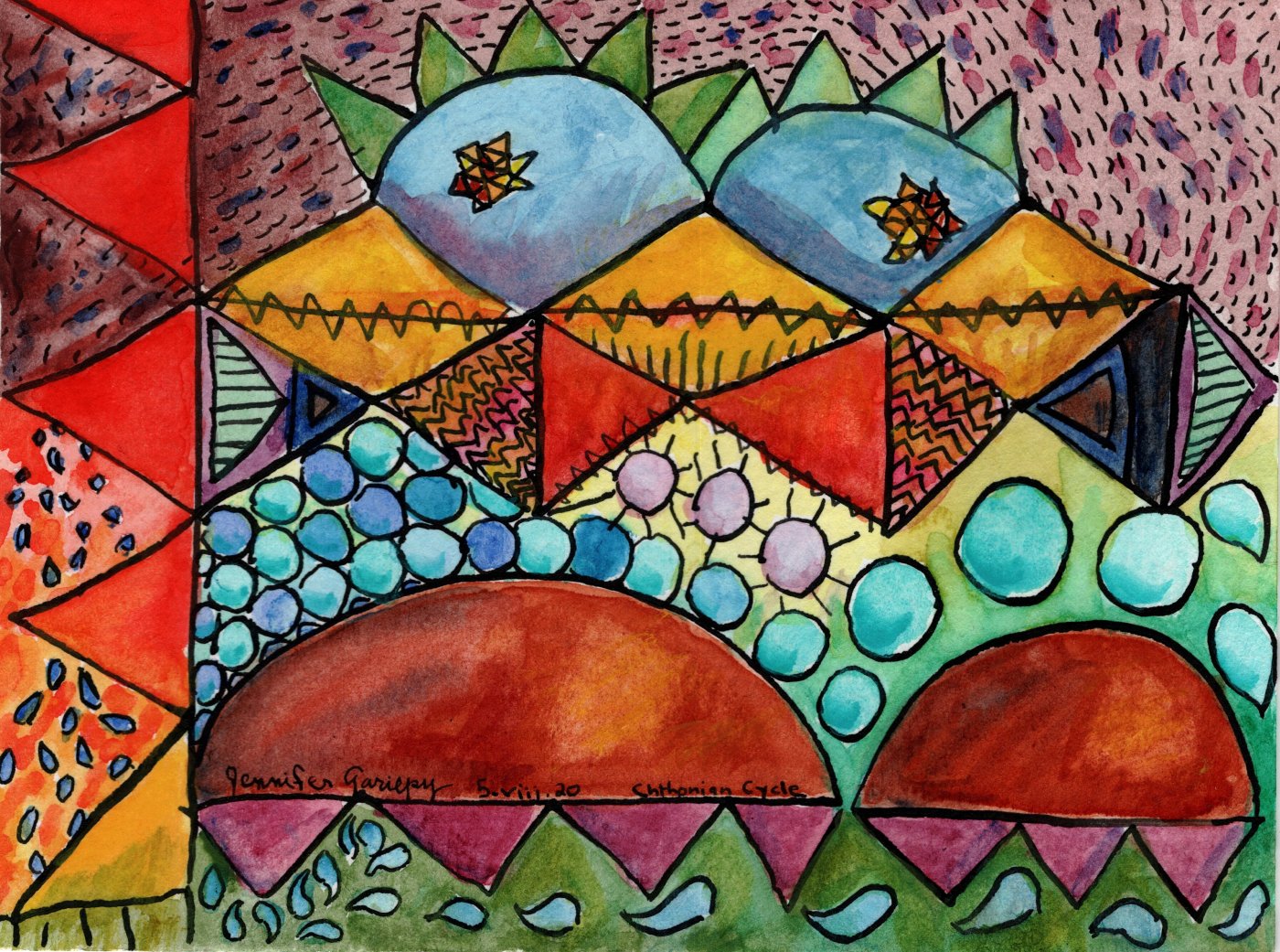 In the 29 June 2020 New York Times I came across a review by Roberta Smith of a retrospective show of quilts by the artist Effie May Martin, whose patron respected her privacy by showing her work under the pseudonym Rosie Lee Tompkins (“The Radical Quilting of Rosie Lee Tompkins” https://www.nytimes.com/interactive/2020/06/26/arts/design/rosie-lee-tompkins-quilts.html). Her amazing skill with color and composition sent a jolt of electricity through me, and immediately I began drawing designs based on shapes and stitches I imagined I would use if I were sewing together quilts made of scrap cloth.

Pieced quilts were originally made to reuse fabric scraps. Fabric is the end result of a lot of hard labor by divers hands, and in pre-industrial times it was too valuable to waste any scrap that could be stitched into something useful. Old clothes were patched and pieced back together until they were too worn to use as clothes anymore, then the fabrics were converted to other uses, such as quilts that could warm and comfort people.

African American quilters like Rosie Lee Tompkins and the quilters of the town of Gee’s Bend elevated the quilt beyond these humble origins. They produced quilts as works of art, not only using color, texture, and shape to develop their compositions, but also incorporating relics, special pieces of cloth, such as scraps from the clothing of loved ones or bits of cloth taken from clothing or décor associated with significant occasions. The quilters also incorporated pieces of decorative material with slogans or iconic images and added text in the form of stitched lettering. Though their works are usually geometrical abstractions, often utilizing conventional patterns, they are loaded with ideas, truly modernist or post-modernist in spirit. Although I am drawn to geometric abstraction in my work, I often wonder if I am just creating empty formal exercises that are pretty, but ultimately convey nothing beyond a more or less pleasant experience. These quilts demonstrated to me a number of ways that abstractions can be layered with meaning, and they sparked me to apply those ideas in my own painting.

As I worked on the series, I began thinking of people I might honor or comfort with a quilt, if I were making actual quilts. One who came to mind was the poet Bob Kaufman, whose books The Ancient Rain and Golden Sardine are just as exciting and original as the quilts I was looking at. Like the quilters, he used bits and scraps—in his case, of found phrases and sound—and he played with them, transforming their wording and incorporating them into the rhythms of jazz and Buddhist chanting. He was my first candidate for a personal quilt, which I named after one of my favorite poems by him.

I also made a quilt for a friend who died a few years ago. Like Bob Kaufman, he was a talented person who had a rocky life, and he was often distressed by his circumstances and in need of some comfort. He had a bright inner light, but it had to filter through a lot of troubles.

As I painted his quilt, I began thinking about how there are many people who are in very much the same predicament. Their inner light is brilliant and unique, but finding their path through the world is a challenge which leads them to feel like failures, even though they might achieve some success in conventional terms. Their success along conventional lines eventually does them more harm than good. It is as if the commonplace world is inimical to them, despite their best efforts to fit in. At this point, I encountered the idea of the heroine’s journey, a feminist concept first developed by Jungian psychotherapist Maureen Murdock. Murdock was a student of Joseph Campbell who found that his hero’s journey model did not adequately describe the experience of making one’s way in the world that her female clients described. Theorist Victoria Lynn Schmidt further developed the concept to encompass the female experience in areas other than psychotherapy (Murdock’s model is described in her book The Heroine’s Journey: Woman’s Quest for Wholeness. Schmidt’s model is described on the web page https://heroinejourneys.com/heroine-journey-ii/).

Subsequently, I made a number of quilts to comfort people—male and female—who were caught up in the perils of a heroine’s journey. I applied the lessons I found in Rosie Lee Tompkins’ quilts, using symbolic shapes and colors to characterize spiritual qualities and struggles, and to represent human souls.

I used a red triangle in these works to represent a female soul, or the feminine principle in any soul, and a faceted sunburst circle to stand for what I think of as the Ultimate Principle, which the writer Anselm of Canterbury referred to as “the thing than which nothing is greater.”

As I painted more quilt images, I found myself wanting more complex color. What is the Ultimate Principle that underlies everything in the universe? According to quantum mechanics, everything is composed of pure energy. In a manner of speaking, we are all made of the same stuff as light. As anyone familiar with color theory or optics can tell you, color is (to over-simplify) the way our eyes perceive different frequencies of light waves reflected off of things. It seemed particularly appropriate to symbolize the complexity of souls and situations in the universe by using tertiary colors rather than simple primaries or secondaries.

I began playing with layers of color and setting up tensions between complementary colors, trying to push my materials beyond my habitual combinations and practices, trying to break through the barrier between concept and painting to produce something that was a pure expression of a spiritual truth. I wanted to paint an enlightenment.

Ultimately, though, I was limited by the nature of my materials. Mixing paint is not the same as manipulating pure light energy, and paintings are not pure emanations of spiritual power. Artists are always forced to simplify. As humans are constrained by their physicality, locked into the bonds of space, time, and ego, so my paintings are constrained by theirs. I was strangely relieved to discover at this point that the Swiss artist and healer Emma Kunz, who initially created her images as a means of researching psychic energy patterns and diagnosing her patients by imaging the energy fields she perceived around them, eventually abandoned the use of artwork for this purpose in favor of more direct means, like touch.

An interesting thing about these quilt paintings is that they are based on India ink underdrawings, a procedure I don’t normally use. Ordinarily, I paint directly without an underdrawing and avoid the use of black, achieving my darkest darks by mixing complementary colors. Ultramarine blue mixed in equal parts with burnt sienna (a rusty orange, the complement of blue) yields a nearly neutral gray, one that is not biased towards any of the spectral colors. In the painting above, the matrix of small colored squares is set in a nearly black field painted with ultramarine and burnt sienna. Pure carbon black can have a dulling effect on colors mixed with it, and I prefer the more lively darks that can be achieved with complementary colors. In these particular images, though, the contrast between the dull black ink framework and the colors seems to make the colors glow, much like the thin black lead cames in a stained glass window make the glass colors seem more brilliant.

Rosie Lee Tompkins made some masterful quilts using only black and white, and this moved me initially to do India ink drawings. Working at first in black and white helped me to think about the types of shapes she used and the way she arranged them to create her effects. Many of her quilts make use of a limited number of shapes, but vary them in size and placement to create a sort of jittery rhythm that Roberta Smith likens to free jazz improvisation.

One of the most stunning of Tompkins’ quilts has a large central panel of triangles wrought in three shades of blue velvet. One shade was deep, smooth, and almost black, and the other two were lighter, nearly identical in shade and distinguished mainly by their texture. The drawing below is my response to that quilt.

As I got deeper into the series, I thought about her use of printed fabrics and about quilters’ use of scrap fabrics. Working in black and white enabled me to think about the sorts of prints I might have in my scrap bag if I were an old-time quilter, and some of the ways I might piece them together.

As I was working on these images, I thought about actually taking up quilting instead of just trying to depict quilts using a medium other than cloth, but the tricks that one can play with paint seduced me away from that idea.

After all, I still am in love with the almost magical way you can make things happen in paintings that you can’t achieve in three-dimensional constructions. Despite its limitations, the medium offers me a form of transcendence.

Essays in Art and Imagination by Jennifer Gariepy 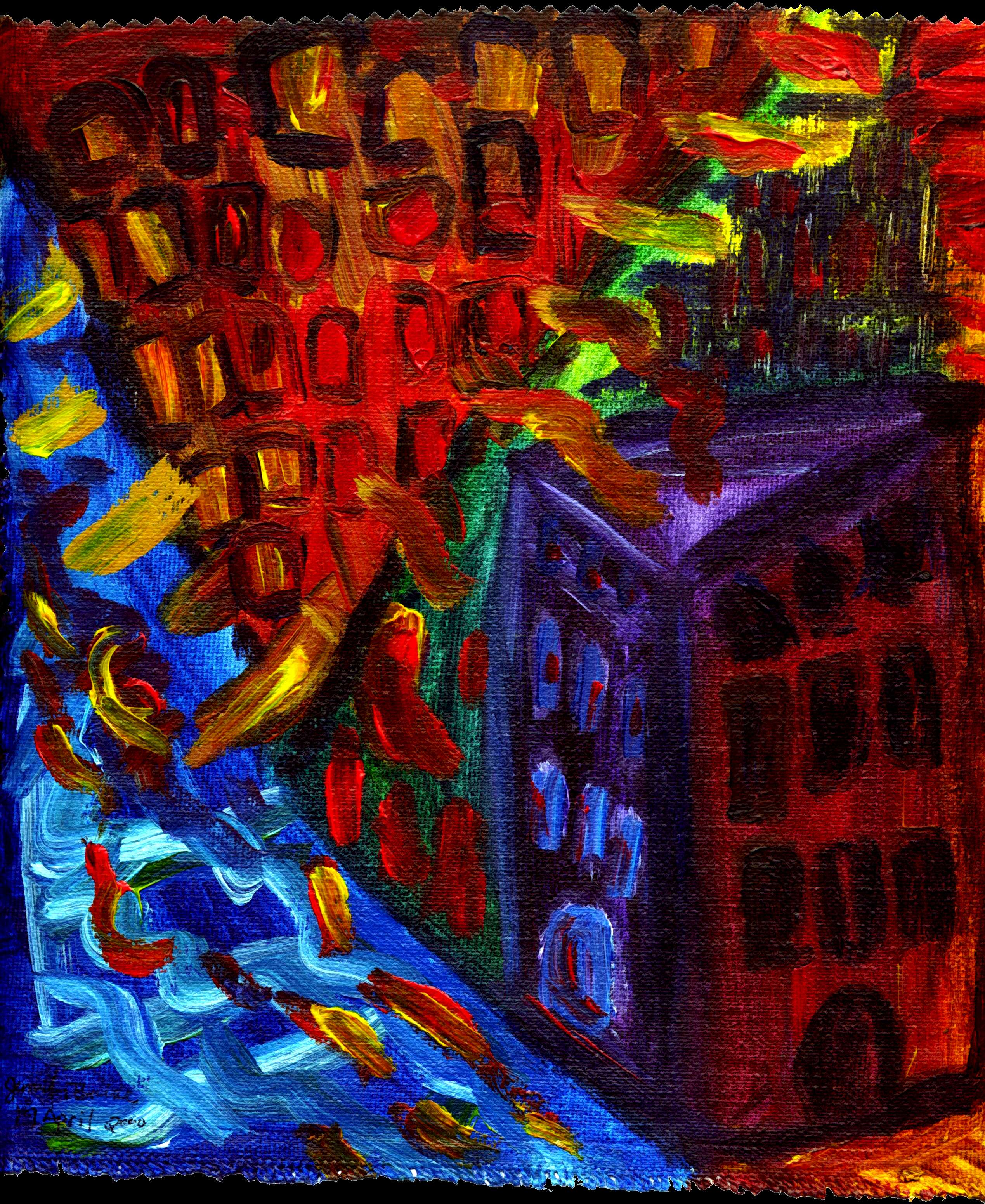